Posted on November 6, 2017 by Julie Nichols
There are a few brands of PEMF machines on the market that claim to have 30,000 or even 45,000 gauss. This makes them sound impressive indeed, but is it real? We can easily determine this by investigating the magnetic strength of another well known system, the MRI.
The HowStuffWorks web site has this to say about the strength of a typical MRI and the dangers resulting from that magnetic strength:
“The biggest and most important component in an MRI system is the magnet. The magnet in an MRI system is rated using a unit of measure known as a Tesla. Another unit of measure commonly used with magnets is the gauss (1 Tesla = 10,000 gauss). The magnets in use today in MRI are in the 0.5-Tesla to 3.0-Tesla range, or 5,000 to 30,000 gauss. Extremely powerful magnets — up to 60 Tesla — are used in research. Compared with the Earth’s 0.5-gauss magnetic field, you can see how incredibly powerful these magnets are.
Because of the power of these magnets, the MRI suite can be a very dangerous place if strict precautions are not observed. Metal objects can become dangerous projectiles if they are taken into the scan room. For example, paperclips, pens, keys, scissors, hemostats, stethoscopes and any other small objects can be pulled out of pockets and off the body without warning, at which point they fly toward the opening of the magnet (where the patient is placed) at very high speeds, posing a threat to everyone in the room. Credit cards, bank cards and anything else with magnetic encoding will be erased by most MRI systems.
The magnetic force exerted on an object increases exponentially as it nears the magnet. Imagine standing 15 feet (4.6 m) away from the magnet with a large pipe wrench in your hand. You might feel a slight pull. Take a couple of steps closer and that pull is much stronger. When you get to within 3 feet (1 meter) of the magnet, the wrench likely is pulled from your grasp. The more mass an object has, the more dangerous it can be — the force with which it is attracted to the magnet is much stronger. Mop buckets, vacuum cleaners, IV poles, oxygen tanks, patient stretchers, heart monitors and countless other objects have all been pulled into the magnetic fields of MRI machines. Smaller objects can usually be pulled free of the magnet by hand. Large ones may have to be pulled away with a winch, or the magnetic field may even have to be shut down.
Prior to allowing a patient or support staff member into the scan room, he or she is thoroughly screened for metal objects — and not just external objects. Often, patients have implants inside them that make it very dangerous for them to be in the presence of a strong magnetic field. Metallic fragments in the eye are very dangerous because moving those fragments could cause eye damage or blindness. People with pacemakers cannot be scanned or even go near the scanner because the magnet can cause the pacemaker to malfunction. Aneurysm clips in the brain can be very dangerous as the magnet can move them, causing them to tear the very artery they were placed on to repair.
MRI magnetic fields are incredibly strong. A watch flying off an arm and into the MRI machine is entirely possible.”
You can see from this that PEMF machines can’t possibly be producing 30,000 gauss, or 3 tesla, of magnetic field. If they were, they would have to have all manner of safety protocols for their users. If they are making such claims because they can get their machines to produce these high levels of gauss under certain conditions, such as only one particular frequency for a millisecond, then they are grossly misrepresenting how much continuous gauss can be achieved…they are affectively lying to their customers by leaving out the details.
Secondarily, and just as telling, is what hospitals have to do in order to even have an MRI machine in terms of power. We did the research on the magnetic field strength. Now go do your own research on the electric power structure that is needed to run these huge machines and ask yourself, “can the PEMF machine who is claiming 30,000 gauss possibly do that with just a 270 watt system?”
In this photograph, you can see a fully loaded pallet jack that has been sucked into the bore of an MRI system. 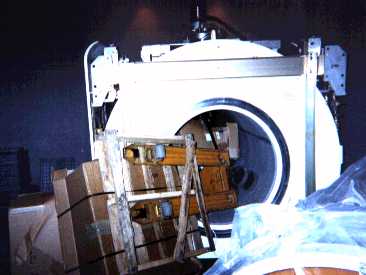 I'm a retired elementary teacher who has diabetes and had an accident in which I fell in a wheelbarrow...yes that's right a wheelbarrow! Between the two I sustained considerable nerve damage. Then one day Larry Langdon came to my home with a PEMF device he developed and had for his Lyme disease, after one session I was pain free for five days. This lead me to research PEMF ( Pulsed Electromagnetic Field) therapy and I found that it has been around for at least 40 years. I have found that NASA has done thousands of studies and uses PEMF, as does the military. It is also well known and used throughout Europe. This is the beginning of my journey into PEMF the rest of my journey you will learn about through this blog. In the end it's about making this technology available to everyone for general health improvement.
View all posts by Julie Nichols →
This entry was posted in Myths, Uncategorized and tagged alternative, AmpCoil, brain, comparison, electrical resonant transformer, EMF, gauss, healing, magnetic fields, MRI, Myths, pain relief, PEMF, pulsed electromagnetic fields, pulsed electromagnetic therapy, reactive oxygen species, tecnology, wellness. Bookmark the permalink.